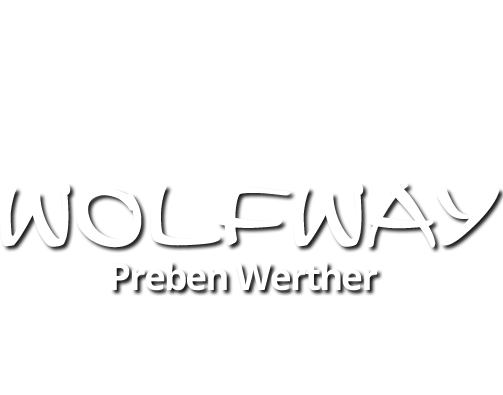 Preben Werther’s and Wolfway’s focus is to create change and results leaving imprints in the minds of individuals, and in organisations.

Work is done at all levels of management with organisational fitness, management development, strategy, innovation and optimisation. In addition, Preben Werther works via critical mass, rolling out strategies and plans with the aim of translating them into effective, measurable actions.

Wolfway’s name is inspired by nature and the American Indian philosophy, where the wolf is seen as the true pathfinder – the one who always finds the shortest way between two waterholes. A pack of wolves exploits focus, leadership, community, cooperation, knowledge sharing and efficiency to obtain success. The pack is a good illustration of an organisation with focus on what works, and where no unnecessary resources are used.

Achieve your goals and get success

Lack motivation and inspiration to solve an important task in your organisation?

Need tools for development as a human being or as a manager?

Does your organisation lack cohesion and a common understanding of its overall mission and goals, or has your development come to a standstill?

Or, in short – replace the unconscious autopilot with conscious choices and actions?

Then Preben Werther and Wolfway is a good place to start.

Preben Werther’s focus is on overall and key frameworks for managing and working in an organisation. We are experts in assisting change that leave its imprints. Our core services are custom-made courses and seminars adapted to precisely the requirements of the individual organisation. Preben Werther offers different tools to make you and your organisation break with old habits, think out of the box and achieve synergy in their work. Our large network of business partners and specialists ensure that coaches, trainers and instructors are always handpicked for the job in question.  Wolfway is owned by Preben Werther, who possesses many years of experience with personal and organisational development.

My dream is to make a difference – to gain more and use less via synergy.  At the same time, to contribute to generating creative, productive frameworks for the development of people and business areas, to instigate growth and to create a warrior attitude amongst employees, and to ensure the company’s visions and goals are transformed into unique market value.

Sailing. I’m a skipper on my own Folkebåd 811. Former chairman of the Yacht Club in Vejle (700 members) over a period of 10 years, and a considerable driving force in connection with Vejle’s new yacht club. Furthermore, skiing and hunting.

Dream, Vision
To generate creative, productive frameworks for the development of people and business areas, to instigate growth and to create a warrior attitude amongst employees, and to ensure the company’s visions and goals are transformed into unique market value.

Preben Werther and Wolfway’s expertise is to develop courses uniquely adapted to the current challenges facing you or your organisation. Therefore, no two strategy seminars or team building courses are similar. All the same, it is important for you to get an impression of  Preben Werther’s working methods. For that purpose, the below list shows the various types of activities and courses to illustrate how a course can be constructed.  At the same time, the various descriptions may inspire you how to use Preben Werther for the exact challenges facing you.

Agile seminars of up to three days’ duration deal with assistance for change, strategy and innovation processes, or team building for management groups or departments. Preben Werther has facilitated processes in several major Danish companies as well as a number of minor companies, and for individuals – typically at management, department or project level.

The frameworks can be adjusted according to temperament. They may consist of scenically located conference centres, or of an “Innovation Walk/Ride” in scenic surroundings in Denmark or abroad. Alternatively, it may take place in a 50 foot yacht in the waters around the Lillebælt.

The modus operandi will be based on the attitudes, mindset, adaptability and personal fighting spirit of the individual. In addition, the process will be tied up on an agile proactive planning process, preferably combined with Insight’s excellent Discovery Preference profile, laced with High Performance Team building and the lawfulness of nature. Results of coaching and an agile seminar can enable you or your company to

Agile Project Leadership APL
Project management is one of the most demanding disciplines in management – it’s not something you just do! And the formula for your success with your project depends on how you get your team and process running!

Participation on an APL enables you to go to the next level from good project management to the extraordinary – where you are on the cutting edge of developments. Be agile in your thinking, get receptiveness and understanding for goals and plans and you will inspire your team to success. A four day intensive program on taking project management to a new level!

We work from morning to late night. To arrive in a condition where it is possible to learn something and grasp what is really important, it is crucial that you can be 100% present, both mentally and physically.

En route , Preben Werther will also share much of his extensive experience, both as a coach and from his many ambitious projects and jobs where he has participated.

Full Circle
Full Circle is an intensive development course in three parts. The programme offers personal development and training in completing important, complex projects, and in maintaining and further developing corporate culture. WolfWay creates holistic frames for people and organisations wishing to tread other paths, so therefore you will be trained to feel yourself and to dare venture in unconventional directions. You will work with personal development plans and gain insight into your own strengths, weaknesses and blind spots.

The objective is to create balance focusing on the whole person and on finding and developing the             warrior in your own life. Full Circle is constructed on theoretical and action-fed phases. This construction opens up for a very high level of involvement, dynamics and creativity. It can with advantage be carried out within a period of approx. six months. Each part has its own focus area, together forming the whole person :

“Preben is a professional and out-of-the-box thinking coach that will boost your personal drive in reaching your goals and is a key factor to your personal success. Be prepared to get forced out your comfort zone and start making changes to live!!
I recommend him happily as a mangement consultant.”

“Preben is the first person I have worked with who makes you really understand yourself in dept… His approach as a person with power is unique and behind his kindness you will see and learn about a serious top professional coach that will move anybody working with him. Preben walks the talk! I would highly recommend him.”

“Preben Werther is an outstanding coach, inspirator and facilitator, and has been my collegue for 7 years in Pathfinder.
Courage, determination to make a difference and a big heart in the right place are caracteristics of Preben, that shines through all that he involves himself in. Being with Preben is never dull. His energy and spirit spills over and generously inspireres his surroundings.”

“Preben Werther was among my students during his graduation in Physical Education in the Danish Forces and it was an awesome experience to meet him again 30 years later, discussing what we both are “burning” for. He was a tremendous inspiration for me and with great pleasure I have adopted some of the approaches he showed me. No doubt that with his dynamic methods and effective training tools he lies far beyond the average in this field.”

“Preben Werther (PW) has served in the Danish special forces, the commando unit ”Jægerkorpset”, in the years 1984-1996, during which he has also completed all supplementary training and education on a continuous basis.

PW is also described as an experienced, skillful and energetic instructor. He possesses great authority, and has a great interest in the military service, as well as he holds several civilian/ public duties.

PW’s skills in regard to planning and leadership are rated above standard. He is very knowledgeable and manages to transform this knowledge in ways that serves as an inspiration to those around him.

He meets the special requirements that are demanded, both physically and mentally, and thereby demonstrates the resilience neccessary to hold a position in the special forces.

PW always shows great initiative, and he is also very imaginative. He takes an active part in the future development of the special forces, where he contributes with high-quality input.

PW’s sense of responsibility, his professional knowledge and skills within his area of expertise in ” SF Jaegerkorpset” should be emphasized. He conducts himself with great authority, which has resulted in extremely satisfactory results when it comes to the results obtained in the special forces training and educational activities.

PW leaves his mark on ”Jægerkorpset”, as he has had a decisive influence on the unit during his service.”